Over the centuries, the Melton Mowbray area developed a very high concentration of cheese production in particular Stilton Cheese which has European Protected Status. The development of the diary industry was encouraged by the Enclosure Awards of the 1700’s which incidentally created the perfect foxhunting environment. Whey, a by-product of the cheese industry, was an ideal food for pigs so pork became a common feature of the Melton diet. Originally baked in a clay pot covered with a rough pastry, the pork pie evolved to resemble a “parcel” of pastry wrapped around a pork filling. This allowed the pie to be carried whilst at work (agricultural workers, grooms and hunt servants would often carry them), and the pastry case was discarded before eating. 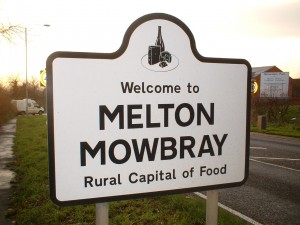 In the late 1700’s foxhunting developed in the Melton area, Melton Mowbray becoming the centre for the three famous local hunts (Quorn, Cottesmore and Belvior) and the capital of foxhunting in England. The local pork pie was “discovered” by visiting hunters who saw their grooms and servants eating it during the 1780’s. It was particularly noticed because the Melton Mowbray Pork Pie differed from other types of pies the visitors saw elsewhere.

The pie developed further, a hot water crust pastry was used as the edible casing raised by hand around a bottle or wooden dolly, hence the expression hand raising a pie. The meat of the pie when cooked was grey in colour, not pink, because the hunting season coincided with the slaughter over the autumn and winter months of local pigs, and the associated production of pork pies. The pies were baked free standing which gave their bow shaped appearance when they came out of the oven. Bonestock jelly was added to the hot pies to fill all the air spaces to preserve the meat inside the pie longer and to ensure the pie did not crumble when carried by huntsmen riding over ditches. The fresh meat, grey when cooked, seasoned with salt and pepper, crunchy pastry, succulent jelly and the distinctive bow-shape of the Melton Mowbray Pork Pie distinguished it from all other pork pies. 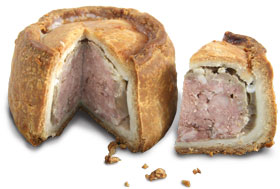