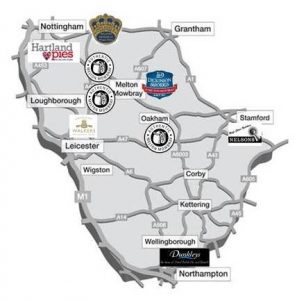 MM07. Nelsons Family Butchers, Stamford, Lincolnshire
Nelsons have been baking in a purpose built pie factory in Alma Place, Stamford since 1959. Their famous Melton Mowbray Pork Pies are made from locally sourced pork and encased in a rich hot water crust pastry. Nelsons are one of the founding members of the Melton Mowbray Pork Pie Association. To find out more and buy their products online, please visit www.nelsonsbutchers.co.uk

MM08. Brocklebys
Brocklebys prides itself on providing high quality foods with provenance. Over the years it has won many awards in recognition of this, including most recently the best Pie/Pizza/Pasty, at The Soil Association Awards in Sept 2012. From their farm shop in Melton Mowbray, as well as baking authentic Melton Mowbray Pork Pies they also produced a variety of other pies, including, game, chicken & ham. For more information, please visit www.brocklebys.co.uk

MM11.  Dunkleys (Billington Food Service), Wellingborough, Northamptonshire
Dunkleys is one of the Country’s oldest, family owned, pie makers in existence. Dunkleys is the leading supplier of pies and desserts into the pub retail sector. Dunkleys were proud to be crowned Surpreme Champion’s at the 2012 British Pie Awards. Dunkleys are one of the newest members of the Melton Mowbray Pork Pie Association, joining in March 2011. To find out more please visit www.dunkleys.co.uk